If you live in San Diego, you know just how many beautiful locations and incredible backdrops the city offers for an engagement or portrait session. It is truly an urban paradise with its endless coastline, tangerine-colored sunsets, old architecture, and modern skylines.

But with so many epic locations within reach, it can be hard to find “the one.” Especially if you don’t already have a place in mind.

Well, I’ve got you! Below are my favorite San Diego locations to photograph. And some meaningful spots and ideas my couples and clients have had that you might just enjoy too.

Balboa Park is like Central Park in NYC but with added California flare and vitamin C boost. It is 1200 planted acres of gardens, trails, and recreational attractions. And includes the San Diego Zoo, several performing arts venues, 12 restaurants, and 16+ museums.

There are a variety of beautiful backdrops, from early 20th century buildings and bridges to Spanish-style villages, botanical buildings, and mid-century museums.

The Botanical Building and Lily Pond are among the most popular spots for photos within Balboa Park. You’ll find over 2,100 plants and flowers on display, subdued lighting, colorful koi fish, and blooming lily pads.

There’s also a ton of gardens to choose from. Some of my favorites are the Japanese Friendship Garden with its peaceful stone arrangements, koi ponds, and water features. The Desert Garden with its alien-like cacti, succulents, and drought-resistant plants from around the world. And the Rose Garden, which houses over 1,600 roses of over 130 varieties.And let’s not forget the iconic Moreton Bay Fig tree. This magnificent giant was planted in 1915. And now, standing at 78 feet high, is one of the three largest Moreton Bay Fig trees in California.

While the Gliderport may be one of the best spots in California for hang gliding and paragliding, it’s also a beautiful spot for photos.

Let’s pack a picnic and chairs, sit back, and watch gliders flying in the sky. The parachutes look like mini rainbows floating across the blue expanse. You can also see views of the Pacific Ocean and over the coast to La Jolla and beyond. And the sunsets will take your breath away.

If you’re feeling adventurous and willing to trek along a rocky trail, Black’s Beach offers some unique photo opportunities.

Yes, if you know the area well, then you know it is a secluded nudist’s beach. But having photographed there before, I promise, there aren’t always people there. And even if there are, we can find plenty of places to snap some couple’s photos (sans naked photobombers.) And if there are people out and about, then we’ll climb some rocks and look out over the coastline instead of at the beach.

East San Diego’s Mount Laguna is like a portal to another world. It’s only a one-hour drive from the city, but as soon as you enter the grounds, you’re transported elsewhere.

With its beautiful views of rolling mountains, lush forests, and hiking trails, it’s the perfect location for an adventurous couple or free spirit. But best of all, it’s an excellent place for stargazing and astrophotography.

Mount Laguna is recognized for its crisp, clear nights and absence of lighting. At times, you can actually see the Milky Way. And what photo backdrop is more dramatic than a glittering galaxy?!

Yes, Sunset Cliffs Natural Park is a particularly great spot for golden hour photos – the time of day right before sunset when everything is a glowy orange and yellow. But it’s truly beautiful any time of day. And with its ocean views, dramatic cliffs, and coastal features, no matter where you go, you’re sure to find an exciting place for a photo op.

Ocean Beach is an ideal spot if you’re looking for those Southern California vibes. We’re talking palm trees, beaches, cool murals, and lots of fun spots to grab delicious grub.I recently did an engagement session with Joanna and Tyson from Ocean Beach. It was important for them to capture their love for each other and this location. So, I infused their photos with various landmarks and the spirit and vibe of the place.

San Diego’s nightlife scene comes alive at the iconic Gaslamp district. This downtown neighborhood is known for its dive bars and cocktail lounges, breweries, and every kind of restaurant you could possibly imagine.

Some of my clients and couples come to me with a location already in mind. These places often hold personal or special meaning. And are places where they’ve spent significant amounts of time with each other or have great memories attached to that area.

Some of these locations include:

Why Choose a Place with Significant Meaning

Photos don’t have to be at a beautiful location to be beautiful. But a good photographer, such as myself, can use their skills and expertise to make any place look fantastic.

Trust me when I say: By choosing a place that means nothing but looks good for the ‘gram, you probably won’t love your photos as much. But by choosing a significant location for you, we can create photographs with a much deeper meaning that you’ll treasure forever.

Whether you’re an engaged couple, a high school senior, or an expecting mother, take some time to think about what San Diego photo locations feel like a good fit for you. I’m happy to give you more information about any areas mentioned above. And if you’re still not sure about the best location, contact me. I would be more than happy to scout out options that best match your style and personality. 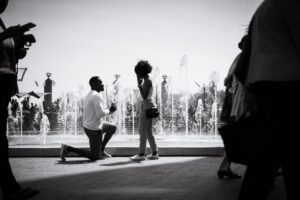 You’ve finally met the person who makes your heart skip a beat healthily. Congratulations on never launching that dating app again. You have found true love, and it’s time to put a ring on it.

Getting engaged is a significant relationship achievement. It’s the first step to starting another chapter of your life with your best friend. While this is an exciting occasion, the pressure to create the perfect proposal has never been higher. 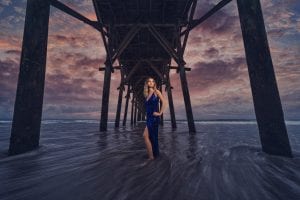 My Signature Style: How I Create Unique Storytelling Images

Have you ever seen a photo that completely stops you in your tracks? The kind that catches your breath and tugs at your heartstrings? That creates a connection that causes a lasting impact?

This is the type of photo I strive to create. Photos that become epic pieces of art. That go beyond static images and, instead, become a portal into an unfolding story. And that you get to experience every time you look at it. 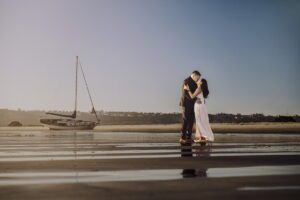 If you live in San Diego, you know just how many beautiful locations and incredible backdrops the city offers for an engagement or portrait session. It is truly an urban paradise with its endless coastline, tangerine-colored sunsets, old architecture, and modern skylines.